I wish i was in quarantine!
I've wanted a couple of weeks off for years.
8 years to be exact.
Ever since i started working casual.
I have no self control.
Havent managed to save up enough to have two weeks off.
Sigh.
Probably i could if i would, but i cant so i dont.

I've books and boxes wot need sorting and clothes to be bagged, curtains to wash and gardens to dig.

I am quite jealous of the older patients who are mostly self isolating who are telling me about all the gardening they are doing.
Bastards!

Self isolating is my normal state of being except for going out for breakfast.

I sent a picture of my attempt at making my own breakfast to my favourite closed local cafe and they laughed and laughed.

I know when i must be looking particularly frazzled at work, because some very nice person, who has been very patient, will quietly wait for a momentary pause between phone calls, which are few, to tell me something nice or uplifting, like ... "you're doing a very good job", or giving us a random box of chocolates. People are very nice.

A large number of people are now ending conversations or phone calls with "stay safe".

We ran out of face masks for the receptionists at work a couple of weeks ago, but Townsville doesn't really have many cases and the risks are low, so I'm not worried.

I await with interest to see how long the hand sanitiser lasts.  If it keeps on like it is we may make it too the mid or end of April.  I think the next delivery is May.

However, we are doing lots more phone consults now so maybe it will all even out in the end.

I am somewhat more stressed about peoples inability to read signs.

We are a plague strewn version of Dr Seuss, but ... we still cannot stop people from leaning on the counter to get in close to talk to us about how they don't want to have to wait because its not safe to linger long inside medical centres with all the sick people.

Easter weekend and i have two days off in a row and hoping to trick myself into being a domestic goddess by talking about all the things i plan to accomplish ...  as if the only thing stopping me being tidy is circumstances and not some illogical mental kink, or maybe a more plain and simple explanation such as lazy lack of interest.

I moved my bed into the longeroom and only rise to go to kichen or bathroom.  The cats love it.  Much snuggling and cuddling, but i really must clean the front rooms and move the bed back into the bedroom, even if it is just for the exercise the five or more steps would achieve, and the sitting up in a chair to watch television which would probably be gooderer for my digestion. 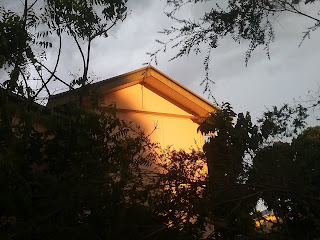 That beautiful shade of gold against blue grey is my favourite. 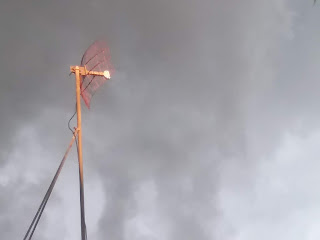 The storm cloud  rumbles and rushes close crowding out the telly. 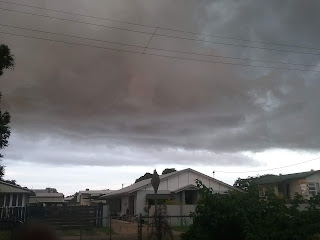 Hanging heavy o'er the house.
Intimdating the outside cat. 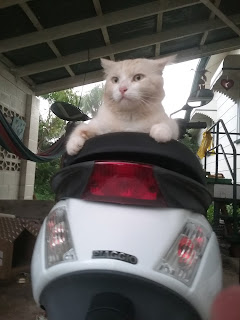 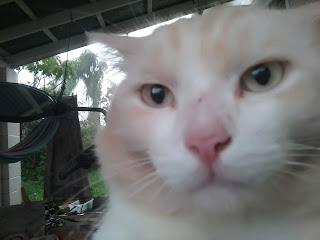 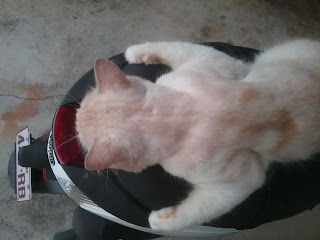 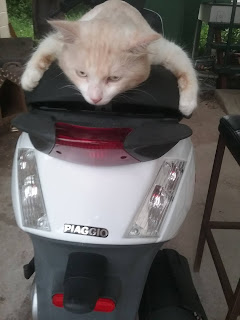 Well, maybe not so much, but who is not over impressed with the noise and flurry.

Still ... its very green at present. 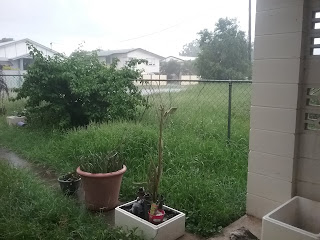 I wish the mower man would come.

I am incidentally watching/listening to Della Smith cook and fuming to the sound of sprinklers and frogs.

My duplex neighbour has boundary issues due to the lack of fence.
He is a very nice man.
Very friendly.
Chatty.
He has worked as a carer for disabled people in the past.
And as a baker.

If i were an elderly lady who wanted someone to do stuff for her, i would be in pig heaven.

I am not an elderly person who wants someone to do stuff for me.

I am a receptionist, at a busy work place, with only two or three people answering six phone lines, whilst also serving many people in a noisy busy open plan space with screaming children and loud people and other people talking loudly behind us whilst we struggle to hear over them; the constantly printing printers which are next to us; and the quite loud fax/copier/printer which is close by. Without the benefit of proper headphones, reduced to clasping the phone to our ears with our shoulder, at badly setup computers with monitors set too low, on inadequate paded chairs, which need replacing and therefore cause both back and neck pain. Not to mention the added noise pollution from the line of people at the pharmacy, situated less than three feet from the desk (and the small children who have seen the lollies on display and far too easy reach, for sale).

Over the course of a five hour shift I may individually speak to 2 or 3 hundred people, whilst scanning, faxing, shredding, not yelling back at rude people, and I really do not want to talk to anybody when I come home.

I don't want them to take my sprinkler from my side of the yard to do their watering.

I don't want them to put their stuff on my side of the yard.

I want to be able to step outside, into my side of the yard, without having to talk to someone else or fend off offers to mend my hose wot i dont want mended (and if I  did could do myself) and which i would prefer to be using with the sprinkler wot i bought wot was in my backyard, ON MY SIDE OF THE YARD before they took it and seem to think that is okay?!

Is it because I am a female?

Bring on the thunder, i say.

It is rumbling in the distance and mocking my sudden surge of proprietary home occupancy, aka me watering the dying lawn for the first time in a couple of weeks, probably solely in reaction to my neighbours most recent transgressions.

Hark! What will the new year bring?

A houseparty full of people singing badly along to country music.

Is it significant that the boys and girls are singing separate parts?
I think it could be a Kid Rock song.
Posted by Mad Cat Lady at 12:22 AM 1 comment:

Fare thee well year ...
With all your foolish virtual self harming thoughts
Punishing maybes
And
Possibilities

It all evened out in the end
And counted for nothing

Some things are more 'more' than they were
But some are less?

Some closer to death
But i feel more distant

Mums is mostly herself
Just tires easily
Dad is sedated

Its amazing how far an ing carries.

Which makes me flash back to a scene from Grosse Point Blank
What an awesome film that was
... for a while ...

My new years resolution...
... apart from quitting alcohol,
Eating healthy,
Exercising and loosing weight) ...
Is to watch Grosse Point Blank on a regular basis
And attempt to learn the words off by heart!

I don't expect it to make me a more complete being

Probably I'd have to watch Lady Hawke for that, ay?

Edit:  you know it really drives me nuts when I can't work out what people are saying!  I refuse to put on dark clothing and crawl closer to their house just to hear. Why! Why did I not invest in one of them there cheap directional devices!  This happens every year.

Edit edit:  and now all the neighbour hoood dogs are taking turns to bark.

And i can hear weird crashing fence noises
Close by ...
... but take reassurence in that they reported arresting the man in my neighbourhood this morning responsibe for a violent home invasion and crime spree, not really, argh!

Did i mention i missed most of 'Dinner for one'?
I love that show
I watch it every year
You should google it

Try and drink along with it, ha ha
Its a challenge!

They have been wooing periodically for hours
I just wish they sounded happier about it.

Edit edit edit:  did i tell you already?  One of my first employers clients told my boss i sounded like a dead horse on the phone.  He called me into his office and made me practice sounding more cheerful.  He randomly called into the office over the next few weeks and after I'd answered the call would bark "SOUND MORE CHEERFUL".

This is what i want to tell the house a block away.

Edit efit editititditargh for heavens sake! Its still five mintes to go and they satarted the countdown to early and mucked it up counting down from ten to five.  Far ou brussel sprout.

Okay now they are wooing again.
They got the time right cause they can hear the fireworks going off in the distance...

Labels: Argh, bad habits, Conflicted, Evil Overlord, Glass of wine in hand, i think i am still breathing, not a poem, Probably not a poem, scattering thoughts like rose petals, Struggling with the theme

An abby-normal (vague reference to movie 'young Frankenstein') burst of energy on the weekend saw me  progress slightly on my gremlin project.

The son of one of the ladies at work grew his hair to shave for a cure.

I donated and asked for a couple of locks of hair.  The plan being to incorporate them into the gremlins.  I thought it would be cool.

However, I've been so tired, they have not grown much.  There has been a great deal more thinking and buying, than doing.

I didn't know why i suddenly felt okay to create, but then i noticed there were threads of black ash spiralling down from the sky and realised i was breathing deeply of the smoke from the grass fires in my area.

I grew up on a cane farm.

The sweet smell of burning cane and molasses, is part and parcel of my childhood.

Its going to get awkward if i have to set fire to my surroundings so i can have the energy just to mop my kichen. 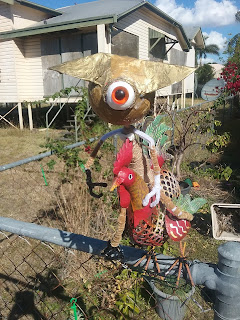 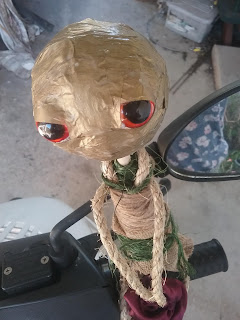 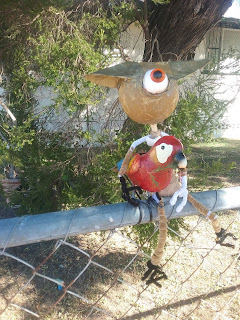 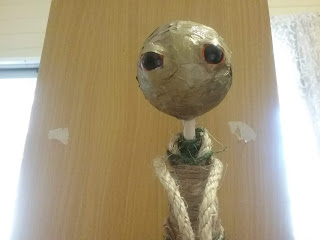 I shouldn't be spending money but,...

An elder gentleman was selling paintings outside the local IGA.

He said he didn't sign his name because once he'd sold it, it belonged to me. 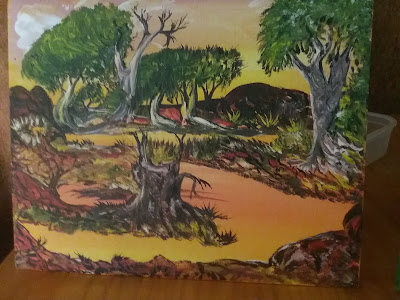