Trying to remember if I ate cheese yesterday

bad dreams of the nice highset house with kittens escaping outside where viscious cat killing dogs are because uninvited people keep leaving doors open - visitors, neighbours, relatives - getting back more kittens than i lost??? - trying not to let people see how many cats i have cause i have too many - attempting to strangle my curly haired niece in a rage because she persisted in leaving the doors open even though i had specifically told her not to *waking briefly because i am crying* running trying to get to the cats before the dogs - getting them inside for them only to escape again immediately - the screened in verandah suddenly only being screened to the top of the railing  (and why are there almost no doors in this house?!?) and kittens jumping over the railing to the waiting red cattle dog below which i also apparently own because the owner had asked me to look after it temporarily because they had moved to a place they weren't allowed to have pets and its a nice dog but it eats cats
Posted by Mad Cat Lady at 12:21 PM 3 comments:

what has the Willows Shopping Centre ever done to me to deserve this?

I quite like the willows shopping centre
Posted by Mad Cat Lady at 7:28 AM 3 comments:

I think this is a glorious post, but can't tell you the reasons why I think it so.
Sometimes I wish I were more analytical, but...
... but then I think maybe I wouldn't like quite as much stuff as I do.

Like people who are fussy about sound and can't listen to crap recordings of awesome songs or slightly out of tune radio stations playing their favourite song.

Am debating on whether I will post to Meme Kettle or not.  I wish she would post more.  But since I am slacking in my on posting I am not in a position to demand.  But perhaps I am in a position to ask?  And I wish the ever so delightful Catastophhe Waitress (*hic* sorry am pissed can't spell) would also post.

But then by extention (or is it sion?) I should also post to all my favourite bloggers who have stopped blogging asking them to post and I've not the energy.  Perhaps I should post one non-blogging blogger a week?  Break it down into manageable proprotions?  As a gesture of good faith to my bid for blogging my own self out of the well of boringness that I drown under.  But would I then be one of those embarrassing people who get up before anybody else at awkward parties trying to encourage everybody else to dance?  I am sooooo not that person.  I don't even go to parties for lands sake.

Should I suggestion some consistantly logical random way of nominating a topic?  Like writing something incorporating the word of the day from the online dictionary?  Or stabbing a finger in a newspaper, rather like randomly opening the bible and reading each day as was somewhere suggested to me in my youth growing up within the catholic fold.  Where did I get that idea from anyway?  Darned if I know.

I stole a bible once, did you know?
I think it was when we were choosing our confirmation name.
I really really wanted to choose Ruth because I was told it was one of the names in running for my birth name, but in the end too many people went ewwwww and I choose Cecillia instead because her picture in the saint book had nice hair and she was playing a piano and there were animals about.  She was also wearing quite a pretty frock.
Sister Wombat, whose actual name I cannot remember, we all called her Sister Wombat when she wasn't around, encouraged me to take a bible home to read to help me choose a confirmation name.  She didn't seem to like Ruth much either, thought she was nicer about it than others and told me it meant mercy, which I was rather taken with.

Perhaps we could brain storm a list of topics and then randomly draw them out from a hat?  What if we all drew out the same topic?  That would be awesome enough for its own post.  Perhaps we could just pick one topic and then post about that adnauseum?  That would hum harmoniously with the inner me that loves shaggy dog jokes and tease my competitve edge all at the same time.  Who can write the best post on one subject!  ooo ooo ooo Isowannadothatnow

I shall probably have another glass of wine and continue reading Marieke Hardy's book which I am enjoying tremandously (tramendously?) (fuck it lots).  As soon as I've finished I am sending it to my Uncle Sidney to read :)
Posted by Mad Cat Lady at 7:47 PM 2 comments:

Ominous rumblings foreshadow an aproaching storm.  Last nights interrupted power supply.  I baked, slow roast, in my ceiling fan deprived state and wondered why of the six candles I had in a line on a low bookcase, only two were flickering - the rest steady as torchlight.  I contemplated my radioless state and the silence and decided to drink the rest of the bottle of wine I had bought to add to the spagboll since the candlelight was insufficient for easy reading.

Tonight the sprinkler has been made redundant and I have braved fat cold raindrops to switch it off.

The thunder, which yesterday I didn't even realise was thunder, is back in long low rolling grumbles reminiscent of a train running past or an extended and rather impressive fart.

My little solar led lights are charged up and ready, just in case and I have finished all the Katherine Kerr books my friend sent me.  I am back to re-reading Lois McMaster Bujold books.  Wil Anderson is performing but I've not the will-power to drag myself into town.  It's hot and I'm stinky and I failed to win powerball.

I shall try and make something of myself tomorrow.  It is still Saturday, isn't it?
Posted by Mad Cat Lady at 8:46 PM No comments:

Labels: Struggling with the theme

So one day I just sprinkled this packet of mixed seeds that I figured were out of date and didn't even bother putting some soil over the top and lo ... I now have my first ever poppies growing in my weed filled garden bed. 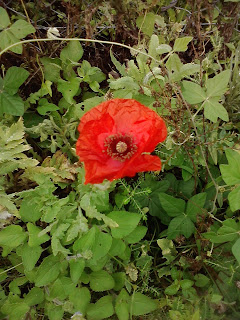 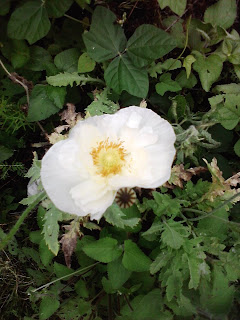 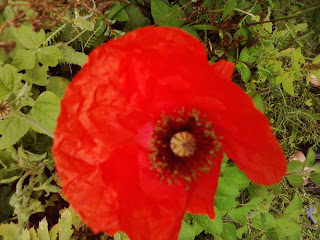 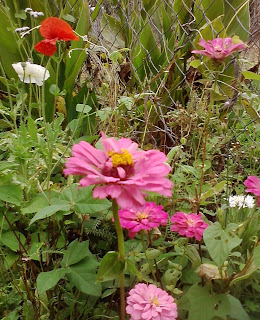 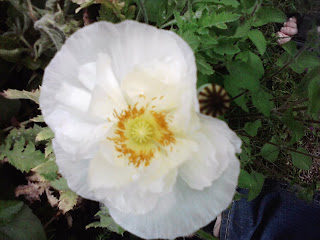 I am sooo bad.  Have spent last few days mostly in bed reading.

Bought the second Autobiography by Russell Brand, which was as funny as the first one.  And shocking.  And had those few times that I have to slam the book down and close my eyes and scream no no no don't do that, before he recounted the embarassing thing and the belly laugh out loud moment, which in the first one was the stripper he'd spat on in retalation for the slap she gave him and then had to beg the use of her phone cause he'd shut himself out of the appartment, possibly naked - can't quite remember now.  In this one it involved a dog.  Laughed so hard I started coughing and had to go have a glass of water.

My sloth reaching new heights or depths considering how you look at it.

Should be gardening and tending to my tomatos which appear to be dying. damnit.

Gosh darn well cleaning all the kitty litter trays out thoroughly tonight for my poor neglected kitties.  I am neglecting them too, though they appear to be loving the whole day snuggling on the bed opportunity.

My delightfuly 90 year old neighbour watched the show about alien abduction.  He's had instances where he has woken from sleep unable to move and I had previously mentioned to him about the sleep paryalsis (sp?) but he never really pays attention to what I say and was delighted to tell me all about it after watching the sceptic lady on the show explaining about it. lol
Posted by Mad Cat Lady at 8:30 PM 7 comments: