... it's one of those nights when I am having ranting conversations/ arguments in my head.

Imagining I am asking a question and rebuttalling.

Then imaging I have demanded an exit interview at my work place (after I  win the lotto cause that is the only way it is gonna happen, sigh) and what I might say .. if I were a completely different person to wot I actually am.

People who call a spade a spade, dressing up rudeness and bullying in virtue etc.

I am making myself tired and also ruining my chances of a good sleep all in one action.

Need to shut my brain down, but patting cats or reading books are not working.

I have an abundance of both. Three cats on the bed (at present, more later if it gets colder) and a pile of books large enough to mimic a bedside table.

I wish I'd bought spirits so I could have a shot of tequila or gin, but am paying rent in advance so I can have a week off in September.

Have roughly worked out I need to pay two weeks in advance so I can pay rent and eat for two weeks for one week off.

Not stressed about that.
Think have under control.
Think should hit close to goal this week with a week to spare or merely be spot on.

Am taking the  week I see the specialist off.

With encouragement from boss since he is having mini holidays during the next two months which are guarenteed to make my life unpleasant.

Last two times he has only given the email password with the nurse manager who is computer illiterate, and who therefore will not let me access the email, since i wasnt given the password, so i couldnt tell what he had or had not told people about record requests.

Didn't leave the code to tbe eftpos machine so I could not process payments for record requests at all.

Really dont want to do it, but they cant sucker anyone else in to doing it.  Do not get paid extra.  Last time went in 7am everyday for an hour (unpaid) just so i could use the computer he has stuffed saved onto the desktop of (which the spade calling nurse manager uses when she arrives at 10/10.30 except at the time she was coming in extra early because of pre employment medicals booked) without interruptions cause one can't do it whilst trying to work reception with a person down since we now only have two receptionists working afternoons nowadays.

Really work isn't that bad, and people interractions are the usual levels of unfairness and nondescript thoughtless bullyfacing wot you would get in any workplace. I have just been there too long.

Have passed six years and drowning.

Surely you should only have to suffer family this long?

Hell.  I spend more time at work than with my family.
Probably why I feel more fondly disposed towards them.
The less I see of them, the more fond I am.

Am contemplating my options for this years xmas present.
Last year was socks.
This year i am considering useless bricabrac, eg small bowls or plates.

My previously diseased sister is trying to redirect my attention to something vaguely useful, such as pens. But, a good pen is going to cost twenty ot thirty dollars or even more, and I am trying to keep xmas presents down to ten to twenty dollars.

Cheapness being the whole point when one is single, attempting self support and having twelve or more people to buy presents for at xmas time cause noone will agree to do a chris kringle in case they get my other sister as a presentee.

Actually ... maybe I am feeling a little tense this evening?

Really, it is so hard to know sometimes when one is perhaps being a little over emotional, until maybe one writes a blog post and perhaps comes to the conclusion upon rereading, that maybe ones is being perhaps a little excessive upon consideration.

Is there any wine in the house at all?
No?
Bugger.

Snowball beat up George when he visited the other day.
He yelped in a most distressing way.

I wish I owned a footspa.
I am totally in the mood for foot spa.
I don't even own a bucket I could fit two feet in.

So ... I asked George to smile foe the camera. 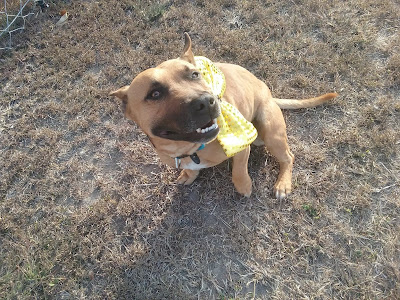 So before Thomas left, he had a interesting moment.

I girded my loins and boxed poor Thomas up and took him to the vets to surrender him, in the hope he was microchipped and had an owner to be returned too.

By golly, didn't the lady at the counter make me suffer.
Very not nice.

A overly detailed explanation that they don't take surrendered cats anymore and the council are supposed to come collect them direct etc, whilst still giving me the paperwork and taking Thomas away.

Particularly since I'd popped in the day before and spoken to someone different to check it was okay to drop him in to see if he was chipped or not.

I wish i were more assertive and could have told her to bring him back then cause I really didn't want to leave him with someone who wasn't going to be nice to him. Damnit!

He cried all the way there in the car and i told him not to worry, it was all okay. Everybody would love him and be nice to him and tell him how beautiful he is and i just feel like such shit now.

I am just going to keep any other cats that show up at my place from now on.

I have a feeling she looked familiar.
I wonder if she is a patient taking out some dissatisfaction with her gp on me.

None of the patients really seem to believe that receptionist don't have complete control over the order patients are called.

Reception is the lowest of the low.
We wash the doctors dishes for heavens sake.
Why would anyone think we can tell them what to do?

Was trying to save up for a week off in September, but think I should cancel that and save up for a vet visit for Snowball instead.

... is reluctantly inside due to the invasive presence of Lord Whiffle-Trout the Third. 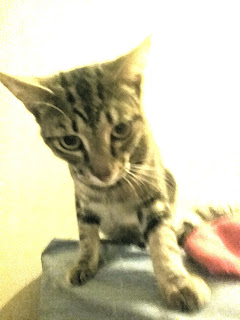 My cats are not exactly happy campers, but Snowball was nicer than I expected when I was feeding Thomas food in the gutter.

He is so young with such big feet!
He needs lots of food.
He seems well cared for so I don't quite understand why he is scrounging. 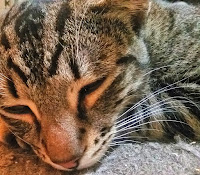 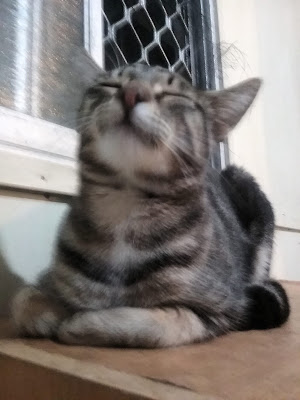 ... has been up close and personal a lot lately.

Quite difficult to fit five cats and me on a single bed, but they seem quite determined. 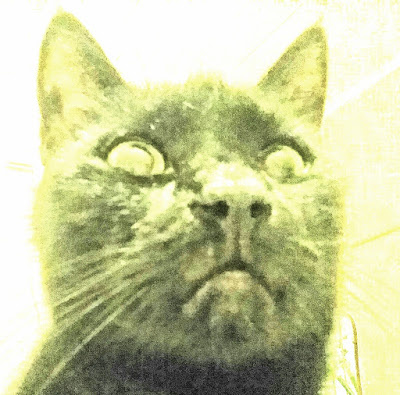 George, the Houdini of the small but fat headed dog world, has been very tolerant of my dressing up - photo opportunitites.

But, today he said no.

Even with the softening up pre-fish-tender offering, a pastell coloured wig with a unicorn horn and little ears was a step too far. 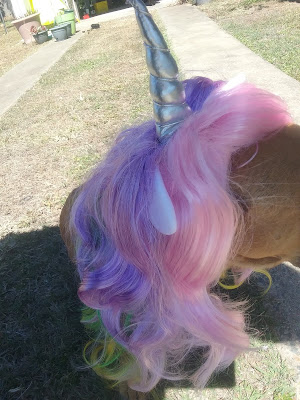 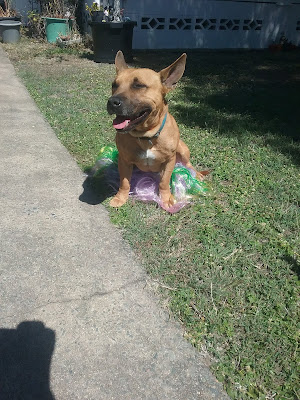