Of course and then there is the other cat

Some of my other cats have quite strong views about photography. 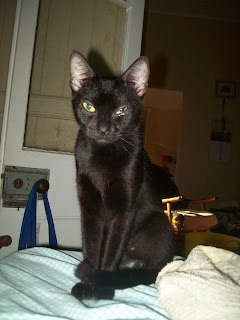 Some have stardom thrust upon them

So since I did the Blossom post, Woolliff has been posing around the yellow bucket/basket-thingy quite shamelessly.

A star is born

well ... now that i am working again, all-be-it only temporarily, the prospect of perhaps flying south to listen to bands play raises its tempting head again.

I shall have to trawl to see if anybody i love is playing in the next few months.

For it will only be the next few months that I could possibly do it, as the temp job finishes 29 June (though of course potentially sooner if they suddenly decide to get rid of all the temps or potentially longer if they think i am good and they still need me).

It is a maintenance call centre and so far not unpleasant.  Not busy this week, which is both good and bad. Time to settle in, but one learns quicker with more variety.  First pay isn't until Wednesday or Thursday and I am champing at the bit and living on tuna in white sauce with rice for the foreseeable future.

Probably mostly porridge.
Not sure if I'll cope with porridge for the next five days.
Particularly if I have to resort to the powdered milk with it.

Borrowed money from the eldest which I am vastly looking back to paying back next week.  And sister, who has also been very kind to me.  And thinking obsessively about all the things I want to buy and trying to mentally brake myself at the sametime.

but i NEED an ironingboard and a carpet shampooer and cupboards and chests of drawers and large wall hanging mirrors to remind myself to iron and brush my hair and tidy the darn room they are reflecting.

I decided that one of the deciding factors in my decline into true boom-site-ed-ness was the lack of mirrors. Have not had mirrors around for decades. Need perspective.  Plus I've seen a nice big one with a lovely frame at a second hand store :)  wantz wantz wantz

but am going to be terribly strict on the saving side of things as well, since I have become better at surviving on what is essentially less than half pay.  $600 a fortnight I can't cope with, but $700 or $800 a fortnight I think I could do.

Niece and nephews birthdays coming up too. Gotta makeup for Christmas.

I will miss watching my cats snooze but 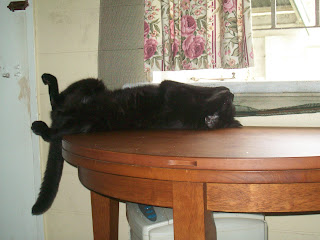 We could have each other with cream

Why do birds suddenly appear?

hum, well ... they said they would call this week to let people know who had the job, so i figure i ain't got it - not that i was really expecting to get a call - the interview didn't start out well for me

so i think i screwed it up again after that

not to mention i can't seem to stop myself getting a bit watery-eyed when the subject of my last job comes up - instant stress reaction, though i don't actually burst into tears - i wore my glasses during the interview this time to try and cover it up, but they aren't tinted, so not sure how effective a cover it is

my previous boss - the nice one who left before i did - rang to say he might have something coming up in the next couple of weeks, so i have my fingers crossed

anyway, so i've kind of taken the last week off from looking for work whilst i was waiting to hear back from the court job